Every year for the past 5 years Tornado Event Hire have had the pleasure of accompanying the Reeds Rains Conference Team on their annual Roadshow. This year was no different and the tour kicked off Monday 15th June in Harrogate and went down the country ending in London a week later.

Reeds Rains put on a yearly conference for their staff to recognise and celebrate their achievements and give out awards to the best teams and individuals in the area.  The evening includes presenters from Right Move, Audio Agent and Zoopla to talk about Industry news. 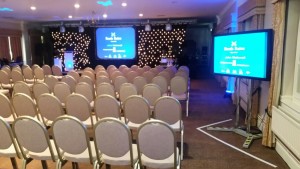 and starcloth backdrop. The stage was to be used by the various speakers as well as an area for Awards to be presented. We took the 5mx2m Revostage which would provide plenty of room and is quick and easy to set up.

For the AV, we supplied an 8’ x 6’ rear projection screen which displayed videos and slides throughout the night. This was supplemented by 2 55” LCD Screens either side of the audience which were synced with the projector to great effect!

The star of the show had to be our stunning new lectern, which 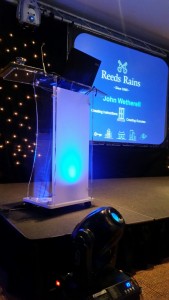 nearly upstaged the presenters! The clever placement of an LED Uplighter lit up the lectern in company colours and it attracted lots of great feedback. We will definitely be using it again!

On Sunday afternoon Dave set off from Stevenage with trusted Lighting Engineers, Neil and Neil! It was a tiring week, covering 571 miles and at least 30 hours rigging, de-rigging and rehearsing!

The roadshow was a tremendous success, well done to all involved and special thanks to the Tornado Team for their hardwork in providing an exceptional service to the client once again! 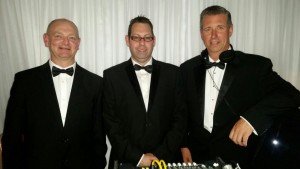